The film Sabotage is based on the Polish political novel The Secret Agent , and was filmed in 1936 when fascism was the driving force. The story is about a movie theatre owner Karl who planned to carry out terrorist activities in London, but the activity failed and he mistakenly killed his wife’s brother Stevie and died by his wife’s knife.

In the movie, the motivation of Karl’s terrorist activities was not explicitly revealed, but the atmosphere of terrorism coincided with the European environment at that time. The name of the cinema owner in the original novel was not “Karl” as in the film, but was Adolf – the leader of the Third Reich. Hitchcock may have changed Adolf’s name to another common German name, Karl, in order to avoid being too explicit, or to avoid suspicion – but the change inevitably made fantasies of “National Socialism” and “Communism”

Whether or not the film was a reflection to the politics of the time, The way Hitchcock dealt with the ” vague motivation” of such a criminal subject was unusual for a film during that period, as well as for other Hitchcock films. Of course, the film’s brilliance lied not in this respect, but in Hitchcock’s ability to create and handle horror scenes. The climax, in which Stevie was blown up on a bus, was impressively handled from gestation to explosion, with just the right shots of gestation and sudden. It made the audiences feel deeply sorry for the death of young Stevie by the unexpected outburst. In addition, Carl’s wife’s psychological changed after learning who her husband really was and the truth that her brother was killed by her husband. With her psychological struggle, she finally stabbed her husband to death. The whole process was also short and powerful. When we look back, we will find that Hitchcock’s mere interpolation of Carl’s wife’s fantasies about her brother and the use of suggestive scenes fully achieved the desired effect – the gaze of Carl’s wife at the knife during dinner (a suggestive close-up of the knife in the camera) and her attempt to remove her wedding ring were both subtle and clever messages to the audiences that the “relationship was breakdown” and the possibility of the tragedy that may follow. This reminds the audience with the beginning of the movie Psycho when Marion packed up his things and prepares to “roll the dough and run”.

However, after the undercover police officer, Ted saw the murder of Karl’s, especially when Karl’s wife has always wanted to turn herself in, Ted still wanted to help her escape from the punishment. He even wanted to run away to America with her, and this plot was a bit abrupt. Ted’s transformation and early decision making were not developing enough in the move so that the character of Ted was not as solid as other characters. On the whole, though, it was one of Hitchcock‘s good films before he left Britain for America in 1939. 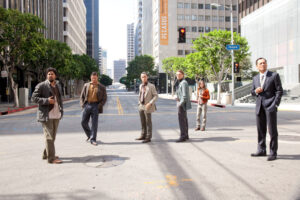